This age of disinformation certainly hasn’t started with Trump and the Republican Party, although they’ve done yeoman’s work to perpetuate it. When Jesus was crucified, his followers had to blame someone so they first took it out on Judas Iscariot, then extended it to all Jews. Only thing was that Jesus himself was Jewish, as was Judas, and, with the exception of Romans, so was everyone else in Jerusalem at the time. I’m puzzled why the Romans aren’t now blamed for the death of Jesus, since, well, they tried, sentenced, and put him to death on the cross. Then came the Middle Ages and the Crusades, when word was that Jews along the route were killing Christian babies and drinking their blood. This of course was not true, but, the Crusaders believed it and murdered as many Jews along the way to the Holy Land as they could find. So far, those two myths, along with the Aryan crap advanced by Hitler and his Nazis, persist today with the help of Neo Nazis and, well, many Republican white nationalists. Then in the mid 19th century, white slaveholders in the American South contended that people were unequal with the White race entitled to enslave the Black race and do with “their property”, i.e. their slaves, (including breeding them as they would with any animal!), as they wished. They even fought a Civil War over this disinformation and sacrificed the lives of over 800,000 people over it. We, i.e. the Republican Party, are still, in effect, fighting that war, with disinformation today whitewashed and scrubbed as something other than the racist tropes of 1861.

All was relatively quiet on this Western Front until Donald Trump took power in 2016 when the engines of disinformation really got going via social media and particularly Twitter. QAnon, White Supremacist groups, and other fringe far right radio and TV networks, all got the go-aheads they were looking for in a president that openly supported such disinformation, and gladly retweeted it and even cooked up quite a bit of his own brazen lies, culminating in his biggest whopper that the election of 2020 was stolen from him via election fraud. Of course when you think about it, how could there have been fraud when he was defeated but many Republicans down ballot were elected in the disputed battleground states. Of course, cult members don’t think for themselves so they wholeheartedly swallowed the lies, culminating in the the most virulent attack on democracy since the Civil War: the attack on our very way of government on January 6, 2021 by Trump supporters who even carried Confederate flags into the breached Capitol building with the entire roster of Congressional officeholders present at the time gathered to verify the election of the legitimate elected president, Joseph R. Biden.

Now, after a year and a half of Trump continuing to peddle his rubbish, he is threatening to run again in 2024, something that is looking like a continuation of the coup he started on 1/6/21. Remember, Hitler was jailed after his failed putsch, only to come back in a few years to assume the chancellorship of Germany. As with Hitler (and now Putin, I might add), Trump never ceased spewing his vile and incendiary oratory to a duped and dispirited populace with the intent of casting aside democracy in favor of autocracy and the Fascism that usually follows. He just can’t resist himself, as his father’s voice echos in his head like a blast of tankfire. Of course he also has the support of Fox “News” with their chief morons Tucker Carlson and Laura Ingraham leading a battalion of conservative disinformationalists, all in line behind their chief marketer of greed, Rupert Murdock; and the leadership and frontline of the Republican Party speaking in lockstep with their “dear Leader”, as they do in North Korea.

In that regard, it’s not much different here as it is in Russia right now with Putin duping his people into believing in his inhumane massacre in Ukraine. Thankfully we do have a sane leader in Joe Biden to help unify the world against the lies of Putin, and encourage the material and moral support of Zalensky and his Ukraine. Biden is the world’s champion of liberal Democracy while Putin and China’s Xi are its foe.

Am I too harsh? Am I just a rabble-rouser, a fearmonger, a liberal, a proud democratic Democrat, or some hysterical bigmouth? I will not defend against any label you wish to put upon me. I am who I am: an American citizen who is alarmed to see our nation slip into the jaws of fascism.

What about you? Where do you stand? What do you think?

BTW: Happy Spring, and may peace come soon to Ukraine, restoring its esteemed position among the democratic countries of the world. 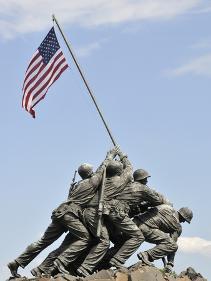 Everyone’s got a moral compass, though everyone may not realize it. From the Christian evangelical to Ron Reagan’s atheism everyone adheres to a moral code in some way or another. Even the prisoners I used to counsel at Walpole Prison in Massachusetts had such a compass, though the glass broke from time to time. One even took meticulous care of all the stray cats in nearby Norfolk Prison. And the suspected Boston Strangler, Albert DeSalvo, whom I met, made jewelry which he sold in the prison store under the label Chokers by the Boston Stranger, revealing, I suppose, his own moral compass, tinged with a sense of humor (BTW, Albert was never convicted of being the Strangler, and to this day, to my knowledge, the case remains unsolved. He was murdered in prison in a drug deal gone wrong.).

Abraham Lincoln had a moral compass, and thank goodness he did, for it helped him win a Civil War that seemed hopeless at times. Lincoln got his bearings from the Declaration of Independence ironically written by Thomas Jefferson, a Founding Father and slaveholder from Virginia, one of the states that seceded from the Union. “All men are created equal,’ wrote Jefferson, “entitled to life, liberty, and the pursuit of happiness.” It was a relatively new and revolutionary concept at the time and became the basis of a form of government, of, by, and for the people, called democracy. And to this day, until recently at least, it remains the basis of our country’s moral compass and the legacy of Jefferson and Lincoln.

Distressingly, this moral compass is now under serious attack by the likes of Donald Trump and his supporters. Thankfully, that attack is being resisted by those who uphold the sacrifices that Lincoln and millions of soldiers in many wars paid in defending democracy from authoritarian regimes over the decades. In our country the fight continues against the bloviated extremists on the far right who are intent to push their fascist and racist ideas onto the entire country and change our moral compass to an immoral one.

Now we are faced with yet another foreign leader also intent on attacking the basic values of democracy and the right of an independent country to choose its own way. Vladimir Putin of Russia is, as I write, waging an invasion of neighboring Ukraine for no valid reason except to protect Russia from unsubstantiated threats from this much smaller country. He knows he can act with relative impunity since Ukraine is not aligned to NATO and so has no treaty assurances that other democratic countries in Europe will come to their assistance militarily. And Putin continues to pummel innocent, peace-loving people with missiles, bombs, tanks, and about 190,000 soldiers in an effort to bring this country to its knees, “demilitarizing and denazificationing” it, as Putin puts it. But, like his ally Trump, it’s Putin who is displacing what is needed to himself onto others.

I propose the U.S., now under the leadership of Joe Biden, change its essentially non-interventionist policy, to one that is more in line with Lincoln’s moral compass, which was to protect the viability and sanctity of democracy wherever it may be. And precedents for this change are already in place. The U.S. is not sending troops into Ukraine because it is not a NATO nation. But the U.S. has and will defend other countries in the world not protected by treaty such as Taiwan, Afghanistan, Syria, Iraq, and perhaps Finland and Sweden who are not in NATO, but could be attacked by a Hitler-infused Putin.

It’s too late to defend Ukraine militarily (although air support could still be considered, as they have requested of the EU), but perhaps Biden should consider a Democracy Doctrine where the U.S. will defend militarily any democratic country from attack by another expansionist-minded country. This would give potential invaders cause to reconsider their intentions and pull back. The Doctrine would of course contain operational and conditional details and would make it clear that actions, such as the present unwarranted invasion of Ukraine would well be met with military intervention by the United States and other willing allies. If such a doctrine had been in effect in 1939, Hitler’s invasion of Poland which started WWII could have been averted, possibly saving millions of lives.

Of course, my proposal will be opposed as the decision to fight Germany was opposed by ultra-conservatives in the U.S. Congress at that time. These were similar to the America Firsters around today–isolationists who wanted to keep America out of any foreign fights. But in this highly complicated and dangerous world of today, such a doctrine would be a strong deterrent against any potential Hitler, as Putin now represents. Ours is a world seeing an alarming rise of authoritarian leaders who have solidified their power through fear, intimidation, violence, and apathy. This includes Putin, of course, but also Xi, Un, Erdigan, Orban, Lukashenko, Castro, Bolsonaro, Duarte, the military junta in Myanmar, Palestinian Hamas, and the ayatollahs of Iran, among others in Africa and South and Central America.

Such a Democracy Doctrine, backed by the world’s most powerful military, would establish the United States as the unquestioned champion of Democracy, which we have been until the Republican Party turned into a bunch of racist, insurrectionist sycophants. Bipartisanship has been tried by Biden and, once again, rejected by, ironically, the former party of Lincoln. It’s time for President Biden to take a significant tack against the winds of authoritarianism both here and abroad.

I’ve recently written and published three books (I’ve been productive during the pandemic’s sheltering in place!) which may be of interest to you. They are Into the Woods…and Beyond, The Valley Spirit: Living a Tao-inspired Life, and Golf 360: For Current Players and Those Considering the Game. You can read reviews of each at my website, stephenaltschuler.com. They are all available at online sources, including Amazon. Thanks.

Ideally, every generation would become a bit more wise and compassionate as time progresses. And this is true in certain instances.   There are wonderful people in this country: bright, compassionate, involved, concerned, caring, and loving.  But in many instances, this is not the case. And so we have people who still follow Nazi ideals, dictates, and actions.  Unfortunately one of those people is the current president of the United States: Donald J. Trump.  Let’s examine this more closely.

There’s more, of course (another Supreme Court choice, a lack of sane gun control). I could write a book. As the Nazis were stopped in WWII, Trump needs to be stopped. Our democracy is at stake. Our freedoms are at stake. Our Constitution and Bill of Rights are at stake. With Trump we are headed to an authoritarian government similar to the one described in George Orwell’s prophetic novel, 1984. And if you don’t know what I’m talking about, please read it. It’s still very much in print, and even more relevant today than the day it was published.