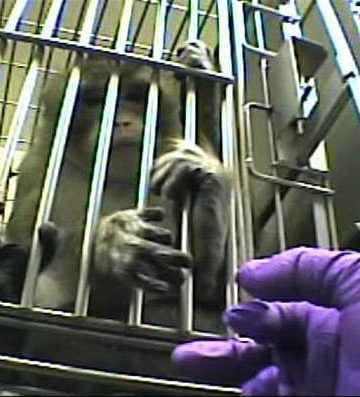 A song written in the 1980s and, in many ways, still applicable today

In the primate laboratories

I can tell you many stories

of thousands of baby chimpanzees

who are maimed and mutilated, tortured and castrated

They make no charges, they lay no blame,

yet their hearts feel suffering just the same.

Let lab animals free, if not you and me, who else will set lab

In the name of research and science

with tax money and government compliance

with an arrogant, heartless defiance,

Monkeys are maimed and mutilated, tortured and castrated

Is this blood bath really needed?

As they’re maimed and mutilated, tortured and castrated

trapped in the tropics, shipped to northern weather,

for they’re maimed and mutilated, tortured and castrated

In recent years the US government has started to phase out the use of primates in research, with the National Institutes of Health making a landmark decision in 2015 to retire all chimpanzees used in biomedical studies. Critics of the practice argue it is immoral and cruel to subject highly intelligent, social creatures so similar to humans to such conditions.

However, other labs continue to use monkeys in large numbers – a record 74,000 were used in experiments in 2017 – with scientists claiming they are far better than other animals, such as mice, for studying diseases that also afflict humans.

Even when monkeys are retired from research purposes, the task of rehoming them in appropriate sanctuaries still proves haphazard.

“What tragic afterthoughts these lives were,” said Mike Ryan, spokesman for Rise for Animals, the group that obtained the freedom of information documents on the Ames primate deaths. “Nasa has many strengths, but when it comes to animal welfare practices, they’re obsolete.”