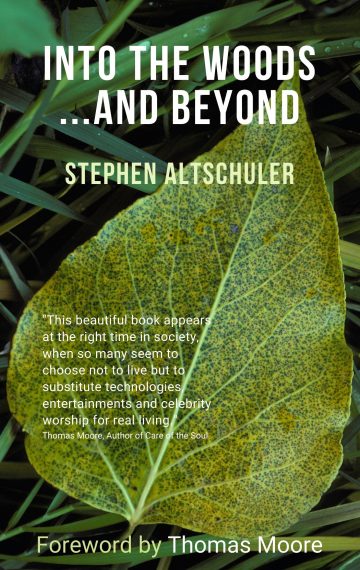 Signed copies of this book are available at Birdhouse Books at 1001 Main St. Downtown Vancouver WA.

For the complete Kirkus review of Into the Woods…and Beyond,

Midwest Book Review of Into the Woods…and Beyond

Into the Woods…and Beyond is a nature memoir about author Stephen Altschuler, a modern-day Thoreau who eschews the rat race of city living to adopt the lifestyle of a thinker and meditator in a primitive cabin in the woods.

Stephen Altschuler’s journey is recounted in a chronicle that embodies the 1970s spirit of self-discovery in a celebration of self and nature that focuses on his openness to examination and input from the natural world that so many urban dwellers avoid.

Unlike Thoreau, Altschuler didn’t already harbor an all-embracing appreciation for the rigors of primitive living or nature. He chafed against the onslaughts and trials of his chosen lifestyle, and reviews obstacles and challenges that include not just confrontations with nature and self, but financial and social concerns.

As he attempts to link these experiences to the wider community around him via writing and recording them for a radio station, he achieves the type of writing which was one of his goals; embarking on a process of discovery that taps into the physical world and the psychic wellsprings of inspiration alike.

His newfound closeness to the land incorporates new worries about its ability to sustain him and itself long-term as he celebrates the simple daily routines and requirements for life in its rawest form: “In these conditions, water seemed more than mere water: it moved, it lived, as life itself.”

As he moves from southern New Hampshire to coastal California to experience different environments and influences, Altschuler learns how to take the tools he cultivated initially and apply them to a way of life that is more effective and heartfelt, whether it takes place in rural or urban environments.

As the hiker and meditator discovers a renewed sense of self and purpose, his choices come to reflect a close inspection of the kinds of traps life presents and how to escape them: “Everything I did, everywhere I turned, I was reminded of the fall and the monkey trap I’d been caught in. How many more times in this life would I reach into the trap, grab the figurative food, and not let go, incarcerating myself in a prison of my own making?  Why did I do such things?”

Readers who enjoy philosophical and psychological inspections will find the lyrical voice and fervor of Into the Woods…and Beyond to be evocative and thought-provoking: “In that instant, holding the bent branch I had transformed into a potentially lethal catapult, I was unconscious, and, for all intents and purposes, dead.  An inner wisdom knew I should let go, be at peace.  But a black shroud covered that wisdom as I staggered, intoxicated by 100-proof ego.  I can do it, I thought.  I won’t be hurt.  I am mightier than this tree.  I will have my kindling.  I will.  I will.  I will.”

Readers of Walden who want to translate and contrast this classic of yesterday with a modern-day journey between worlds could not have a better path to follow than Into the Woods…and Beyond, which should be in any collection where nature, philosophy, and memoir intersect.

author of Care of the Soul,

for Into the Woods…and

As we try to live a meaningful and individual life, some of us make a special statement that becomes the centerpoint of our entire existence. I left home at thirteen with the idea of becoming a Catholic priest. I lived a monastic way of life for another thirteen years and then got on a more conventional track. Often our inspiration doesn’t last as long we might expect, and we go through a number of key experiences that finally seem to merge into a fresh version of the human experiment.

Stephen Altschuler’s initial, life-shaping departure took the form of living by himself for a few years in a tiny shack on the side of a small mountain in an outlying section of rural New Hampshire. He brought with him the spirit of adventure, a few life principles, and an openness toward reading the signs of nature for how he should live. He found the snowy, cold winters challenging and didn’t like sharing his small ill-equipped abode with families of mice.

It doesn’t appear that Stephen intentionally copied Henry David Thoreau in retreating from the superficialities of human civilization, but sometimes his sentences sound very much like Thoreau, who in Walden says  he tried “to front only the essential facts of life, and see if I could not learn what it had to teach, and not, when I came to die, discover that I had not lived.”

A spirit of radical openness saturates Stephen’s book, the worry-free willingness of a man in whom a boyish dismissal of obstacles takes him from one challenge to another. It’s thrilling to overhear the thoughts of someone who sees life as a serious adventure, worth many original experiments and risks. In the Archetypal Psychology that I follow, we call this the puer spirit, the attitude of the eternal youth who in some of us is a minor figure and in others a life-shaping passion. It is a spirit that inspires, is contagious, and would make Stephen’s narrative especially useful to any who have surrendered to reality.

Stephen confesses to the ups and downs of this daring way of life: broken bones, colds, divorces, and elusive financial stability. In myth Icarus falls to earth after rising high in the sky. Those of us who aim high have to know how to fall and fail and make something of the pieces. I like the relevant quote Stephen uses from Ralph Waldo Emerson: “We aim above the mark, to hit the mark.”

This beautiful book appears at the right time in society, when so many seem to choose not to live but to substitute technologies, entertainments and celebrity worship for real living. This book is about choosing to live, following your inspirations and imagination, daring the extraordinary, not making too much of adversity and prizing your individuality. People today look for all sorts of solutions to their depressions and addictions, when the real answer is in living your life, daring to be unique.

In this case, it is also about being close to nature, even in the city, and learning from the natural world how to be human. I was puzzled at first when I found the book going on even after Stephen left his New Hampshire home, too simple and improvisational to be called a shack, to live in the warm, comfortable city of Berkeley. My guess is that he wanted to be sure not to romanticize rural New England and to show how the lessons he took from there found subtle and sophisticated application in less arduous city life.

I relate to his crusade to appreciate the wilderness that hides behind the walls and roads and machinery of the city. This is a good way to deal with the unfortunate split we often make between city and country, nature and civilization. They need each other and benefit from each other’s influence.

Stephen’s approach to life and his writing are a rare example of quiet, soft activism, and the radical nature of his highly individual vision gains power from his willingness to suffer the blows of life as he finds a way toward grace and interior vitality. I suppose I appreciate the tough gentility in this book because I, too, have tried to start a revolution by quietly suggesting we all try living a more soulful life.

In the end, it appears that the essence of Stephen’s philosophy is an endless list of oxymorons. Drop out, but stay connected.  Simplify, but never lose sight of the complexities of human existence. Put your values into practice, but never stop thinking, reading, learning and expressing yourself.

You go into the woods, as Dante did, as a rite of passage. You learn how to live the imperfect life in a devoted way. You don’t aim too high, but you aim higher than most, and so you come out just right.

This book is available now at Amazon.